We’ve found sharing our own stories and listening to the experiences of others a great help; for exchanging of tips and advice, and moral support.  A diagnosis of deafness in a child may be very unexpected and for families, making decisions about something that may be so unfamiliar, can be daunting. Coping with the day to day challenges can make it feel a lonely place at times.  Here are some of our stories and we’d be delighted if anyone else wanted to share their experiences too.

Our son Daniel was born in 2006 and I can remember feeling relieved when he passed his newborn hearing screening test. There is no history of hearing loss in our family, but it was nice to get the ‘all clear’.
As he got older, we noticed that his language was developing more slowly than we would expect. We used some Makaton signs to help him to learn language, and looking back I can see that when a word was signed to him, he would look closely at our face and then copy the word. He learned words this way but did not ‘pick up’ words as most children do from the language they hear around them. He also seemed to have very single channelled attention: when he was concentrating on something he would not respond to anything that was said to him and we had to tap him on the shoulder to get his attention, or move in front of him so that he could see us. In hindsight, it is very obvious that he could not hear us! 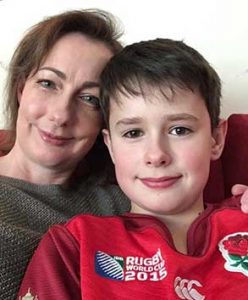 We asked his health visitor to refer him to Audiology at around the age of 20 months, thinking that he might have glue ear. I was quite shocked during the distraction test, realising that he was not responding to very loud noises. It still did not occur to me that he had anything other than glue ear. Community Audiology referred him to the Audiology department at the Royal Sussex, and soon after that he was diagnosed with a severe sensorineural hearing loss.
The audiologists were wonderful, and very supportive as I got my head around the diagnosis. I can remember being very concerned about whether his hearing loss could be progressive, and reading through lots of information looking for answers or indications about what may have caused it and whether this may be linked to conditions that develop in other ways too.
At times, I remember thinking that it felt like my heart would break, because my son would have to face challenges in life that I would not choose for him to have to face. 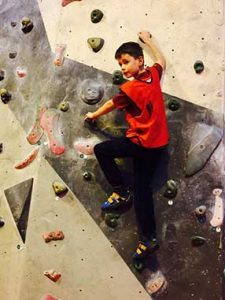 I was very excited about his first hearing aid fitting, and had visions of the world suddenly opening up for him in new ways. I had not considered that he would actually need to learn about sound – of course at first he did not associate the sounds he could now hear, with the things that made those sounds! Over time, he learned to look up when he heard a plane, and could tell when a bus was coming. The first time we went to the beach after his hearing aids, he said in surprise, ‘Sea…loud!’
We were very grateful for the support we received from the Sensory Needs Team, and really enjoyed getting to know other parents of children who are deaf, who continue to be important in our lives. I had a wonderful and often hilarious time learning BSL level 1 with a group of parents, led by the marvellous Caroline.
Daniel thrived, and has consistently surprised professionals with the way that he is able to access sound through his hearing aids. He has had a really positive experience at both primary and secondary school, and the extra work that he needs to put in to follow what is going on around him seems to have made him more determined, and able to persevere. He is aware of the things that are more challenging for him because of his hearing loss, but does not define himself by his deafness.
Although at first I felt so sad for him because of his diagnosis, I can now honestly say that I would not change anything in the past – our experiences as a family, the friends we have met, our pride at the way that Dan has overcome obstacles and defied expectations have all had a part in shaping us in a positive way.

Wilf was diagnosed with a severe/profound hearing loss when he was three and a half weeks old.  He’d failed in his two previous hearing tests and our own efforts, banging saucepans behind his moses basket, had led us to believe that there might be a problem, but still, the diagnosis swept us away from the beach and out into an unfamiliar sea. There was no deafness that we were aware of, in my or Stephen’s families, and our toddler, Nancy, was hearing. 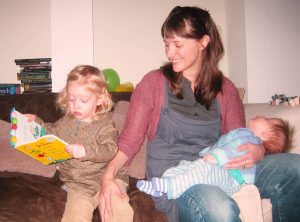 What lead us to dry land again, in the first few days, was the incredible support that we received from Rob Low at Paediatric Audiology and then from the miracle that was our ToD, Karen Gazeley.  I simply cannot imagine how we would have found our way, without their support, wisdom and kindness.

We joined the Springboard group, which introduced us to other hearing parents with deaf children and also deaf parents whose children were hearing and those connections were the start of our realisation that Wilf’s journey might not be the one we had envisaged for him, true, but it was just going to be different, no better, no worse, just different.

We struggled through the joys of Wilf’s infant hearing aids – the constant feedback, his insistence on pulling them out (throwing one over the side of the pier) and then the battle of the ear infections that disrupted his hearing so badly, when he had grommets fitted. We explored the possibility of a cochlear implant, at the Southampton Auditory Implant Centre but we were perfectly happy when they recommended not implanting him because his hearing was absolutely on the borders of where they felt he would gain more access to sound with an implant, as opposed to his hearing aids.

Then suddenly, over the course of 24 hours, his hearing dropped dramatically and never came back.  Our happy toddler, who was slowly developing spoken language, became a very angry, frustrated little boy, and when Southampton offered to fast-track him to implantation, we went for it.  Wilf was implanted on his left side at 21 months old.

Part 2: After Implant, Signing and School

It was amazing to watch his progress after switch-on but nearly 2 years of disrupted hearing had left Wilf with a language delay that we all had to work hard on to overcome.  In those pre-school years, Wilf was frequently frustrated in his interactions with his peers and he often resorted to hitting or biting to get a reaction from his hearing friends – when Wilf walked into the playground, it cleared!  We’d always signed a little with him and a group of parents came together to have evening classes with the lovely Caroline Palmer, and this really helped in those early years for Wilf, but we felt that he was going to need the support of a Statement of Special Educational Need, to provide more help for him in the classroom, and thanks to the incredible support of the NDCS, we were successful in our application.

Throughout those pre-school years, our Teacher of the Deaf was an amazing support, guiding the nursery on how best to help Wilf build friendships as he prepared for school. We also learnt so much from the brilliant families of deaf children that we met on the way.  One thing that I’ve definitely learnt on this journey, is that problems seem a whole lot lighter when they’re shared.

Gradually as Wilf’s language improved, things settled down and by the time he started in his mainstream primary, he was a confident, sunny chap again.  We’d chosen the school for its acoustics, and with the Soundfield System fitted into his classroom, an FM system and his classroom support in the mornings, he managed really well.  It wasn’t always plain sailing but the primary school years were, by and large, a success and Wilf built a great group of friends through school and also through the football teams that he plays for.  Sport is enormously important to Wilf, and particularly through football, he has built a city-wide group of friends, who see Wilf, first and foremost, as a great footballer and friend.

Making the decision about which Secondary School to send Wilf to, was probably more of a worry.  We knew that the listening challenges of a timetable that meant he’d be moving from classroom to classroom, teacher to teacher, for every subject, would be huge.  There would be no chance of a Soundfield System in every class and he’d have to deal with delivering and collecting the FM system from each teacher in each class.  Our dream would have been for Wilf to be taught in small classes, and a family member did offer to help with fees if we wanted to send Wilf to a private school.

We thought long and hard about it, but decided in the end that having local friends with him at school, was the most important thing for Wilf, and we got great support from the secondary school that we chose, with a number of ‘taster’ visits to make Wilf feel more at home before the big move.

We’re a couple of years in now and by and large, I’d say that Wilf is in a good place.   There have been significant challenges for him and for us.   After a bit of a battle with the L.A., it was agreed that Wilf should have one to one support from an I.N.A. (Individual needs assistant) for more than half his timetable.  She helps with the core subjects and also the language-rich classes, such as History and Geography.  I have learnt to be ever vigilant about what help is actually being delivered and have had to engage with the Senco on a number of occasions to ensure that Wilf is supported appropriately. At the end of his first year, Wilf rejected his FM system, insisting that he could hear well enough without it.  We all tried our best to persuade him to stick with it, but when he confessed that he’d been switching it off in class, we had to accept his choice – and sitting at the front of class and having the help of his INA, he seems to be coping pretty well.

Each new academic year, there are a fresh group of teachers, timetabled to teach Wilf and for whom his challenges are unfamiliar.  Training is put in place, of course, but I definitely see it as part of my role to engage as much as possible with these teachers, so that they know that I’m proactive and here to support them as well as Wilf.

The most important things for Wilf are still his friendships and his football and both have thrived.  Wilf’s school team made it all the way to the final of the National Schools Cup and Wilf even scored in the final – so that convinced him he’d chosen the right school!  The move up to secondary can be daunting for any kid (and parent) and whilst it takes a bit of effort, building good communication between home and school has been key.

For me, finding a lovely group of fellow school parents, has helped enormously too – it’s good to be reminded that a lot of Wilf’s ups and downs are just to do with him being a teenager and everyone’s going through the same stuff.  He’s just one of the gang – exactly how he wanted it. 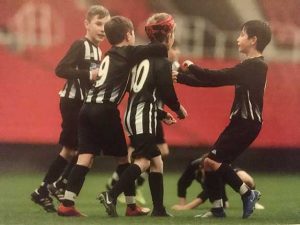